Reflex integration is a process to help a neurological arc that has both a specific stimulus and a predictable response or responses work more efficiently. Primitive reflexes lay the foundation for the nervous system and continue to work in concert with it throughout our lives. They first appear to orchestrate the development of our nervous system and are present for our survival. Once they have played their part, ideally they step back and wait until they are needed for a quick response, often for one’s safety. Reflex Integration means the reflex arc is connected and communicating; it works to meet the nervous system’s requests. When there is an incomplete or weak connection, we call the reflex unintegrated, active, or retained. Thus the reflex may play constantly, disrupting communication coming into the brainstem and blocking some information from reaching the prefrontal lobes. Reflex Integration can be accomplished in several ways, Quantum Reflex Integration uses cold laser to integrate primitive reflexes. Nutrition, movement, low-stress environment, and other factors effect reflex integration.

As human life begins to develop in the womb, the first subtle stirrings of the reflex symphony take place. These initial reflexes emerge in the embryo’s early days, sounding the opening notes of the symphony as they contribute to both the fetus’s survival and its physical and neurological development.

These primitive reflexes set the stage for all that is to follow, and in conjunction they prepare the way for a complex network of neurological connections. This system, benefits from reflex integration and improves a vast array of abilities that encompass cognition, motor control, psychological development, learning, and behavior.

One of the earliest reflexes to appear is a spinal reflex known as the spinal Galant reflex. This reflex begins to develop as the sacrum forms at the bottom of the spine, creating a vibration that triggers the development of auditory processing in the vestibular system. Another early arrival is the fear paralysis reflex, which prompts the fetus to become motionless or “freeze,” protecting him from potentially harmful toxins and chemicals that may gain access to the womb. This freezing action also benefits the mother, during a stressful or dangerous situation, by allowing her to focus on the emergency at hand which allows her to draw on all her resources, thereby contributing to the survival of both.

In addition to the spinal Galant and fear paralysis reflexes, other reflexes appear in utero, including the Moro, stepping, hands-grasping, Babinski, and tonic labyrinthine reflexes, among others.

For nine months, these developing reflexes contribute to the emerging symphony, reaching a crescendo at the moment of birth. Several reflexes play a key role in allowing the fetus to go through the birth process, making it possible for one of the more miraculous movements in the symphony to unfold. First, we have the Moro reflex, which produces cortisol and adrenaline to help activate the birth process. Then the asymmetrical tonic neck reflex (ATNR) comes into play, acting much like a corkscrew as it causes the first rotation as the fetus initiates the journey down the birth canal. The Bauer crawling, spinal Perez, and spinal Galant reflexes orchestrate the further movements that are necessary for the birth to progress. After the baby is delivered, the Moro reflex triggers her first breath and prompts the infant to straighten out after months in the womb.

Once the baby is born, the creation of the symphony is far from over. Indeed, some of the participating reflexes become more evident. Soon after birth, the sucking reflex activates the movements that allow the mouth to suck and swallow, while others support defensive responses so that the newborn may alert others when she is in danger. As these various reflexes emerge during the first weeks and months of life, some reflexes are integrated, as new ones take their place. Ideally, all unfolds on schedule, with the notes being played as they have been “written,” so to speak. Reflexes emerge, contribute to myriad aspects of development, and then integrate, folding back into the system. Integration represents a completed neurological connection that works in concert with the nervous system.

As we will read further in “The Symphony of Reflexes,” an unintegrated (retained) reflex can limit or obstruct a child’s development in countless ways. There are many factors that can cause a reflex to be retained, and unfortunately, these factors are on the rise.

“In The Symphony of Reflexes: Interventions for Autism, ADHD, Cerebral Palsy, and Human Development, Bonnie L. Brandes, MEd, provides a thorough discussion of these primitive reflexes and then presents specific movements in her program, “QRI Brain Boost,” designed to help children with learning disabilities and neurological conditions. As the founder of Quantum Reflex Integration, QRI®, the author uses acu-reflex points and cold laser to integrate primitive reflexes. Her programs are used in over thirty countries.

The timing of this book could not be better, because the incidence of autism and other sensory and neurological disorders continues to climb at an alarming rate, a rate that cannot be exclusively explained by better labeling or improved diagnostic techniques. Understanding primitive reflexes and the role they play in neurological and social development is the key to healing this newest generation.

The Symphony of Reflexes is not only a guide for the recovery of the nervous system for those with autism, ADHD, and other learning disabilities, but also a guide for human development and maximizing human potential.

Finally, Bonnie brings to life environmental factors, such as stress during pregnancy, diet and nutrition, EM Radiation, and the Brain-Gut relationship, as well as the ever-growing amount of toxic chemicals that are part of our environment. Being aware of the potential causes is a key step in securing a healthier future for ourselves and the next generation of children.

Bonnie has assembled an 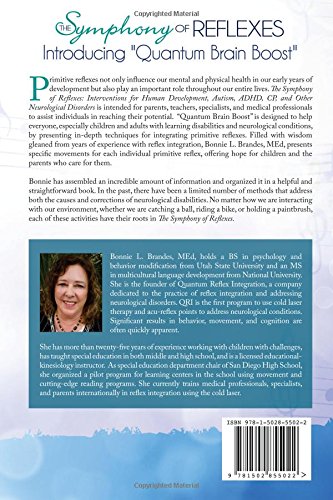 incredible amount of information and organized it in a helpful and straightforward manual. No matter how we are interacting with our environment, whether we are catching a ball, riding a bike, or holding a paint brush, each of these activities have their roots in The Symphony of Reflexes.” —Dr. Donald Gerken DC, DACCP, CSTD

“With ADD, ADHD and autism being disorders resulting from non-typical neural development, it makes sense to address the reflexes which are the foundation of neural development. Important, “must have” information for a classroom teacher or a parent with concerns about a child’s success in the classroom. I wish I had this information 18 years ago when my son was first diagnosed with autism at age 3. Investigating reflex integration 10 years ago, there were only expensive and lengthy therapies available. I believe the therapies that we did pursue would have had faster and longer lasting results with integrated reflexes. This book provides information so that parents can guide their children through exercises in their home and get results. I cannot think of a better gift to a child than having a neurological system that is able to perform the way it is supposed to perform. Get it, read it, do it.”